The preachers and the busker. 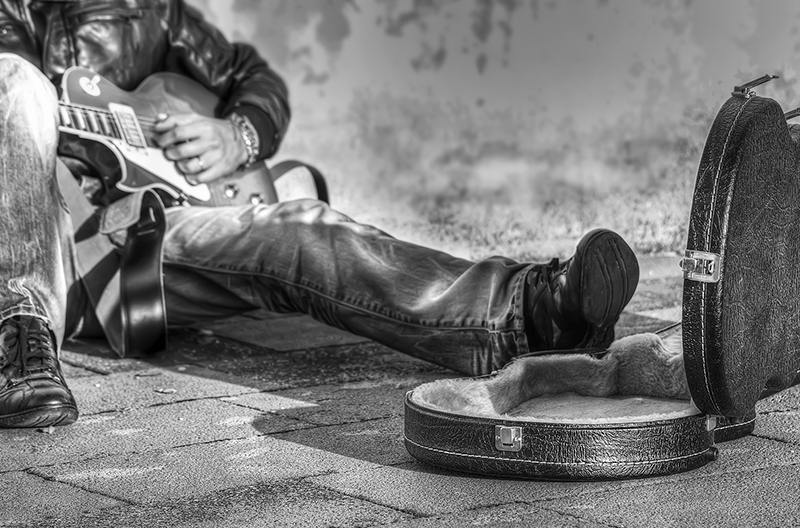 “One good thing about music, when it hits you, you feel no pain.”

A couple of days ago I was walking down a windy Queen Street, the main street in Auckland. It is a street every port city has. It is heady mix of high-end fashion stores, tourists that have just stumbled off a massive, impossibly white cruise liner plus a few people from the streets that are so high, they are angrily arguing with a bus stop.

It was a Saturday afternoon and the street wasn’t that busy. As I made my way through the shuffling shoppers, I began to notice different religious groups every hundred metres or so. They had many pamphlets and a variety of magnificent beards. Cheap megaphones were distorting the precious words coming from a strange combination of angry, smiling mouths just below unflinching, unfocused eyes. To me, the information did not match the delivery. The what had nothing to do with the how.

Each group was stridently espousing their beliefs. Strangely, there was even an anti-religious group doing exactly the same thing as the religious groups next to them. They even looked the same. The people passing by would noticeably increase their pace as they were verbally assaulted by each torrent of vital information. It became comical to watch. The speed of the walking would increase as the preachers volume increased.

I kept walking and I noticed a small crowd. I thought perhaps it would be another preacher. It wasn’t.

It was a young busker. He was singing and playing a bashed up guitar and had his guitar case open. He was relaxed and looked pretty happy. He was having a good time. There were a couple of notes and coins from his playing. The difference was stark. Quite a few people stopped but even those who didn’t, slowed down. And they listened. And they laughed. And they gave that busker their time.

“In the space of a couple of hundred metres, I had seen a fantastic argument as to why creativity makes all the difference. In a single city block, I saw how it can take information and transform it into a gift. A gift, that makes you want to listen and understand.”

The fire and brimstone preachers and remarkably similar anti-preachers incorrectly thought people would listen to their messages because they thought the message was important. They thought the very important information they had would be enough. If they spoke, everybody would listen. But they didn’t. They walked faster.

The preachers were saying what they felt was important.

The busker was saying that what you felt was important.

It might explain why you find so much music in churches.